Boy do I feel special! Regulars will remember that I blogged about the bad ui choice that was made with Facebook’s omnipresent search box a few weeks back.

Well, I went into Facebook today and was prattling off about one thing or the other when my eyes fell on this. 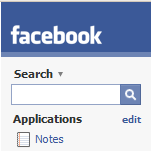 As you can see, it would seem that they took my recommendation to add an actual clickable button to the search box, so that mobile phone users could actually use it.

Of course I kid (kinda) about about being responsible for the change. After all why would company valued at $200bn listen to a lowly Austin Web developer with a blog and an opinion. I don’t know for sure, but I’ll claim it … if only for the fact that no one else is:) Steven Colbert did it with Mike Huckabee’s success in Iowa, and I’m doing it here.